. The number of speakers and their spacing limit the sound field of a portable stereo system.

. Spatial audio attempts to artificially recreate the experience of listening to sound in the real world, or to establish a sensory spatial environment that does not actually exist.

. Using HRTF (Human Head Related Transfer Function) information, the binaural sound can be synthesized as if it came from any point in the space where the listener is located.

. The acoustic beamforming function directs sound waves in a certain direction instead of the typical radiation pattern of a speaker.

. Many methods can provide spatial audio, but for any reasonable size on a small portable device, most of them are not suitable.

In a natural state, the sound around you is spatial in nature. The sound source is a point in a small area in the entire space, but some sound sources are from a wide area, such as earthquakes and landslides. The sound is reflected on various objects in the environment. What you hear is the direct sound and reflected sound of both ears. After some human hearing, the sound is finally recognized. You can make some judgments on the processed sounds, and use some signs to determine their characteristics, such as direction, position, loudness, background, quality, distance, tone, fullness or thinness. If there are two or more sound sources, you can also determine the mixing characteristics of each sound source relative to the total sound received by the ear.

The principle of spatial audio reproduction is simple: if the reproduced sound waves reaching the two ear drums are exactly the same as the real sound source at a certain location, you will feel the reproduced sound as if it were a sound source from that location. This has nothing to do with whether the sound source is sent from other locations. The sound data that reaches the ear is processed by the brain, and finally all aspects of the sound are specified.

The ear's HRTF (Human Head Related Transfer Function) describes how you receive and process sound from a certain point in space. Frequency response HRTF describes how the human body gathers sound signals, and how the auricle (or external ear) and ear canal filter signals before the sound reaches the cochlea. The ring-shaped symmetrical outer ear (or pinna) constitutes a special-shaped antenna, so that the position-dependent and frequency-dependent filtered sound reaches the ear drum, especially the higher frequency sound. 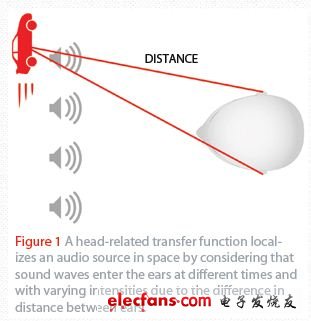 Figure 1 The head-related transfer function considers that sound waves enter the human ear at different times and have different intensities due to the difference in distance between the two ears, thereby locating the sound source in space.

Everyone's HRTF is different, because sometimes hearing and physical characteristics are significantly different. However, multiple HRTF measurement databases use general classification methods, such as male or female, and young or old, and are usually used in consumer audio applications that require HRTF. This measurement may take a lot of time, because people cannot hold their heads in a fixed position for a long time, so what they get is uncertain data. Therefore, some creators of HRTF data only measure the simulation head. This simulation head is a model based on the average human head and human ear to avoid errors in head movement.

Your ear can determine the direction of the sound in three dimensions, front / back, up / down, and sides, the angular resolution is about 3 Â°, and the distance can also be estimated, because your brain, inner ear, and outer ear will use Monophonic sound from one ear, compared with the stereo sound (or sound difference) heard by both ears. In a natural environment, individuals have learned the accuracy of their sound localization ability (ie their HRTF data) through multiple trial and error and life-long experiences, and can effectively compensate for the shape and composition of their bodies.

By applying appropriate filters to existing sound signals and combining the sound with HRTF information, it is possible to synthesize sounds that seem to come from any point in space, thereby obtaining left and right channel sounds specifically for each ear. Similar to the separation of left and right channels experienced by headset users, each ear only hears what it should hear. In comparison, the stereo audio signal played through the headphones seems to be limited to a line between the ears. This difference between native stereo and spatial audio produces 3D sound, or virtual sound.

The N-NET Ethernet over coax (EOC) allows IP cameras to transmit over Coax cabling. The Ethernet over coax technology allows the system to extend IP cameras beyond cable distance limitations and also acts as a PoE inserter.
N-net Ethernet And Power Over UTP Cable Converter is an Ethernet extender over UTP cable. It can transmit over telephone line, Ethernet cable, and twisted pair. It is provided with excellent lightning protection and anti-interference capacity.
N-net Ethernet And Power Over Coax Converter is a conversion device for Ethernet over Coax. It can be used in pair or one to multi.The equipment can transmit by telephone line, Ethernet cable, UTP or coax, etc all kinds of common cables.