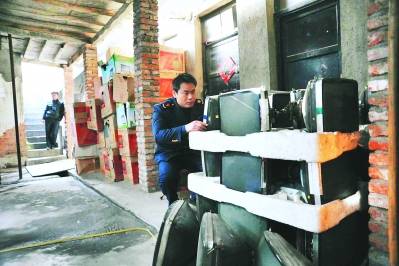 More than 200 bucks of electric baking pans bought from rural areas were broken when they were not used at all. Repairs were found to be counterfeit goods, and â€œGalanzâ€ was written as â€œGalamzâ€. Home appliances to the countryside, trade-in, new energy-efficient appliances subsidies, in recent years, the country has been subsidized in the field of home appliances, so that more farmers can spend less on home appliances. However, recently, the investigation of suburban home appliance supermarkets found that the phenomenon of poor quality small workshops posing as a household appliance proliferation of branded appliances, a person operating the appliance supermarket for many years is broke the news that the current "small workshops" household appliances to account for 80% of the rural market share.

The first time the cottage was used, Galanz was broken. â€œWe bought a new small appliance for marriage. There was a Galanz electric baking pan. It was broken when it was no use. When it was repaired, it was found to be counterfeit.â€ Recently, in Qingdao Ms. Zhu suffered an annoyance at work. She told reporters that when she married Weifangâ€™s rural home last year, she gave her a dowry for her home appliances, from household appliances such as refrigerators to kettles and electric baking pans. The home appliances are all complete, "Marriage is a lifetime event, my mother bought according to brand-name appliances when buying."

Among them, there is an electric baking pan that reads "Galanz." Who knows that the first use after getting Qingdao is broken. "After charging, it was not hot on one side, but it was initially thought that it was broken on the way from my hometown." Ms. Zhu said that Galanzâ€™s after-sales service point was found. People's maintenance personnel immediately saw the problem and said that it was bad. The electric baking pan that was dropped is fake, so it cannot be repaired. Even if it is given money, it cannot be repaired.

How can it be counterfeit when it is bought toward the "Glanz" brand? Ms. Zhu asks maintenance personnel. This question also caused a good "education" for maintenance personnel. â€œIt was too fake for you to read this time. The Chinese character reads 'Glanz'. The English spelling is wrong, and there is no manufacturerâ€™s name, address, or telephone number in the above sign. Product's.â€ After being reminded by maintenance staff, Ms. Chu found that the name of Galanz should be â€œGalanzâ€, and the name bought by her own company had become â€œGalamzâ€.

This fake and shoddy small household appliances is too pitiful, in the face of Ms. Zhu's complaints, maintenance personnel are quite calm, he asked one thing, "You buy it from the rural areas? A lot of this is to bully the people do not understand."